Has everybody forgotten of the importance and noble philosophy of PETA?

Despite its controversial politics and bizarre practices, PETA remains the largest animal rights organisation in the world which takes great care of animals’ well-being and everybody should acknowledge its contribution.

Fighting for animal rights is not only about not eating meat. PETA’s motto is “animals are not ours to eat, wear, experiment on, use for entertainment, or abuse in any other way.” Some people can’t understand why others bother about all of those issues. Since we were little, we have been used to eating meat and drinking milk, wearing leather shoes and wool sweaters, going to circuses and zoos… It seems natural for us to eat a burger in McDonald’s or buy a cosmetic tested on animals. We never consider the impact of such actions on animals. We don’t even have the slightest idea what happens to animals who are raised to be eaten, skinned, experimented on or admired in circuses.

Here PETA comes into play. It brings animal abuse out into the open, so carefully concealed by big companies and enterprises. PETA activists educate us about the inherent worth of animals, a fact which we should all consider before hurting them. “When it comes to pain, love, joy, loneliness, and fear, a rat is a pig is a dog is a boy. Each one values his or her life and fights the knife”, says Ingrid Newkirk, one of PETA’s founders.

Thanks to their work, we know that, for example, dairy farms have mother cows artificially inseminated and separated from their inborn calves, which makes them suffer great emotional distress. In one of the articles on PETA’s official website, we read that “The mother-calf bond is particularly strong, and there are countless reports of mother cows who continue to frantically call and search for their babies after the calves have been taken away and sold to veal or beef farms.” Farmers dehorn female calves using hand saws, searing-hot irons or guillotine dehorners (which don’t spare the surrounding skin). Terrified, weak and susceptible to disease, male calves are kept in the dark up to 5 months just to make their flesh tender. Groups of 45 calves are packed into a single truck and transported even 1,500 miles with no access to food, water or veterinary care.

“Workers on a cattle ranch in Brazil that supplies JBS S.A. brand calves on the face with hot irons and no pain relief.”

Another article on the PETA website tells a story from a perspective of a sheep, one of 80 million sheep in Australia, who is bred for wool. We read that, in order to produce more wool, sheep are bred to have their skin wrinkled. As a result of having too much wool, they often die from heat exhaustion. On the other hand, after having been sheared, they freeze to death. Workers are ruthless – they slam sheep to the floor, stomp on their necks and cut them open with metal clippers. Their wounds are simply sewn with a needle and thread and no pain relief is administered.

Once PETA supporters uncover another case of animal rights abuse, they work very hard to rescue the animals, influence the practices in slaughterhouses, organise protest campaigns and initiate lawsuits. They send their people to work undercover and document heartrending practices. During one such mission, PETA got hold of a videotape where “a circus trainer attacks elephants with a sharp, metal bullhook and instructs other trainers to inflict pain by sinking the hook into their flesh until the elephant screams.” Many circuses have changed their practices, or even withdrawn from featuring animals, after being exposed to PETA investigations.

One of the recent successes of PETA is the abolishing of a barbaric tradition in Apurímac, a region of Peru. Every August, in the rituals of a festival dedicated to the Virgin Mary, people tie up a dog – who they believe has misbehaved – to the back of a bull. Both animals are released into a bullfighting ring only to be violently killed in a bullfight. “In a video of the sickening ritual, a dog is heard shrieking in terror and frantically trying to escape. Eventually, the gate opens and the bull bucks furiously. Music and laughs are heard coming from the malicious crowd,” writes Zachary Toliver in the post on the PETA website. Mary Vigo, a PETA activist, sent a letter to the bishop of Apurímac and urged him to stop this ritual of torture. The bishop agreed that such practice was unacceptable and would not happen again.

Even though PETA works for a good cause, it receives not only praise but also criticism. It is alleged that its members are too extreme at times. They are known for “staging wild publicity stunts, including comparing the activities of serial killers to the butchering of livestock and hosting nude protests,” writes Mike Delvin on Listverse. Notwithstanding their radical politics, PETA has definitely done more good than harm. The writer Norm Phelps once said, “But it’s hard to argue with success, and PETA is far and away the most successful cutting-edge animal rights organisation in the world, in terms of both membership and spreading the animal rights message to the public at large.” Indeed, PETA can be proud of its astonishing 6.5 million members and supporters.

Some social groups are less happy about PETA. Feminists are quick to criticise the organisation whenever scantily clad or naked women take part in various protests, very often out on the streets, saying that it is simply offensive to women. Newkirk’s response to such allegations is that these women voluntarily use radical measures to grasp people’s attention and “if sexual attraction advances the cause of animals, she is unapologetic,” we read on Wikipedia.

Apart from criticism directed at the bizarre marketing practices of PETA, there is a lot of controversy surrounding the topic of pets. According to PETA doctrines, it is against nature that people own dogs, cats or other animals. Such a stance is taken as an explanation for the euthanasia of homeless pets by PETA. “Since 1998 PETA has killed more than 17,000 animals, nearly 85 percent of all those it has rescued,” writes Jeneen Interlandi for Newsweek. As a matter of fact, many of the animals taken in suffer from diseases or madness which are impossible to cure. Alisa Mullins from PETA writes that “PETA opts to euthanise extremely sick or feral animals immediately, rather than subject them to the trauma of further transport and caging that will only, ultimately, end in death.”

It seems that nowadays people are more concerned about animal welfare than ever before. A growing number of people are becoming vegetarians and vegans. More and more countries are introducing anti-animal cruelty laws. The moral status of animals in medical research is questioned. Some people have stopped attending circuses or zoos. We are becoming more aware of the ill-treatment of animals through the activities of such organisations as PETA. As a matter of fact, PETA – People for the Ethical Treatment of Animals – is responsible for many improvements in the spheres of the food industry, clothing trade, laboratory experiments and entertainment industry. 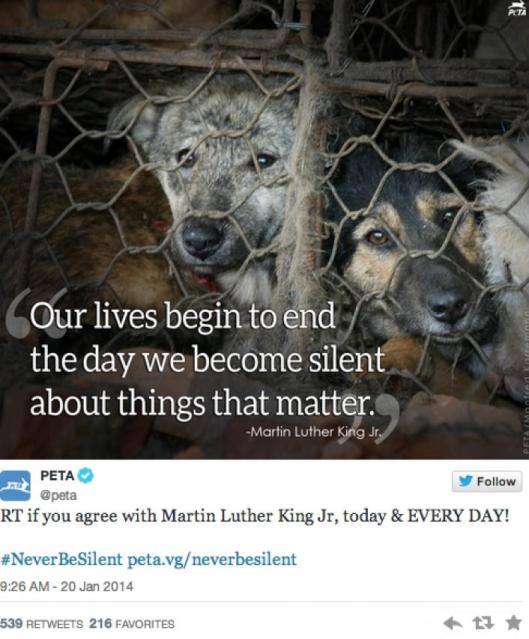 If we come together as a community, there is a serious chance that we can save many animals’ lives. The voice of one person is not going to be successful in the battle against big companies and enterprises. That is why we need PETA. In order to eliminate animal suffering, we must work together under the same name. Only in this way can we change the policies of big brands and powerful enterprises which make profits out of animal cruelty.

This entry was posted in Uncategorized. Bookmark the permalink.